Lee and Elinore Phillips, Giving Voice to the Desires of Our Faith 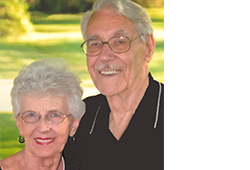 Lee and Elinore Phillips were never acquainted with The Salvation Army. Having grown up in Appalachia in the South, their interaction with The Army was limited. Their only perception was, they knew that this quiet organization "did good things."

After moving north to Akron, Ohio, the Phillips' became connected with a Salvation Army employee who was able to introduce them to an Army of soldiers whose goal was to do the most good, anywhere and for anyone. This refrain, which was accompanied by a robust biblical foundation, at first took the Phillips' by surprise.

Upon visiting a local Salvation Army Corps, they knew they had found a place that is a refuge for hurting and hopeless souls. Both Lee and Elinore are now quick to say, "The Salvation Army gives a voice to the desires of our faith." Multitudes of gifts and years later, they are still quick to speak of their zeal for the mission.

Thank you, Lee and Elinore!